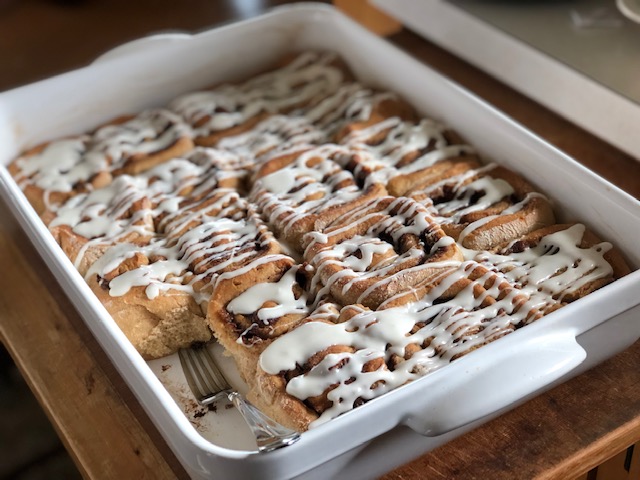 A couple of days ago I made a couple of loaves of whole wheat bread. I was trying to make something that would work for sandwich bread, and because I am compelled to experiment, I decided to make one of the loaves a cinnamon whole wheat bread. This is what the bread looked like. 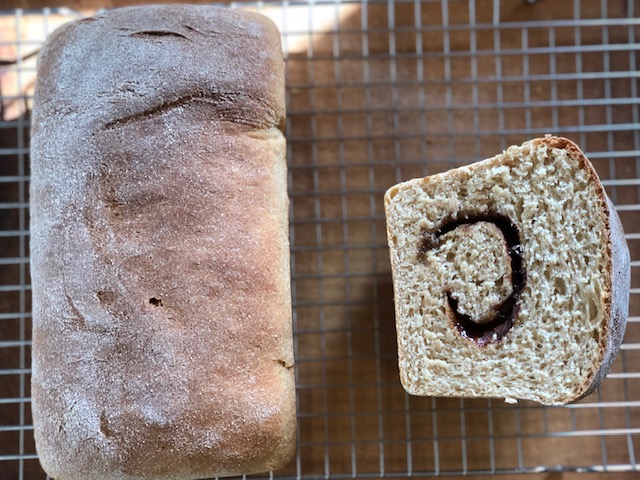 Now, you can’t completely tell by the photo what a fail this was, but nevertheless, my daughters loved it. I sliced it and toasted it for breakfast for the last few days. Yesterday, my 8-yr-old daughter Millie got to be on stage and play her recorder with a few other classmates with The Seattle Symphony Orchestra. Yes, that’s right. Benaroya Hall was packed with 3rd, 4th, and 5th graders, and about thirty kids got chosen to actually be on stage to perform with the symphony, through the amazing Link Up program. I got to be with her (We chaperones were hiding in the back row.), and it was so electrifying to be on the other side of the conductor. Wow. Just wow. On the bus ride home, I asked Millie, “So, what was your favorite part of the day?”. Millie’s response: “Breakfast”.

Well, I had to laugh. “Really?”, I asked, “What about the symphony?”  “It was a tie”, responded Millie. Now, don’t get me wrong and get all excited about my strange experiment. My kids just really really really love anything that slightly resembles cinnamon rolls. So today, I decided to take the bread recipe and make actual cinnamon rolls with it, not some strange bread that has trouble holding together. I took the recipe, that I found here on Jami Boys’ blog, and combined it with how I make cinnamon rolls, with just a bit of guesswork on rise times, etc. This is what I came up with:

Heat up 2 1/2 cups water to about 110° and pour into the bowl of a stand mixer. Add 1 1/2 tablespoons active dry yeast. The yeast should start to foam a tiny bit pretty much right away. Just a bit. 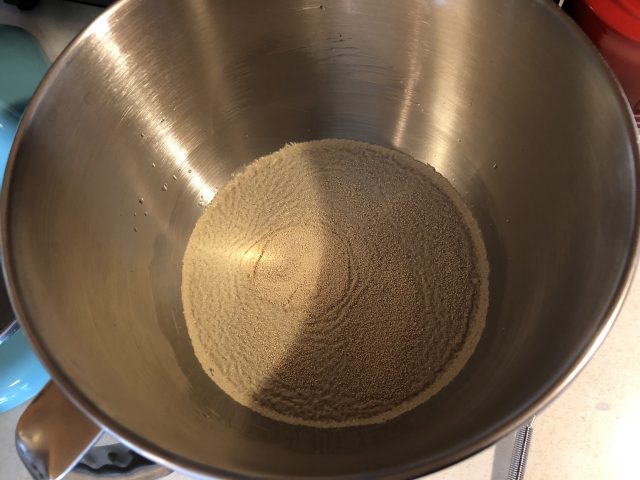 Yeast is my latest obsession.

Then add and mix in two cups (9 ounces) white whole wheat flour, and mix until it’s mostly not lumpy anymore. 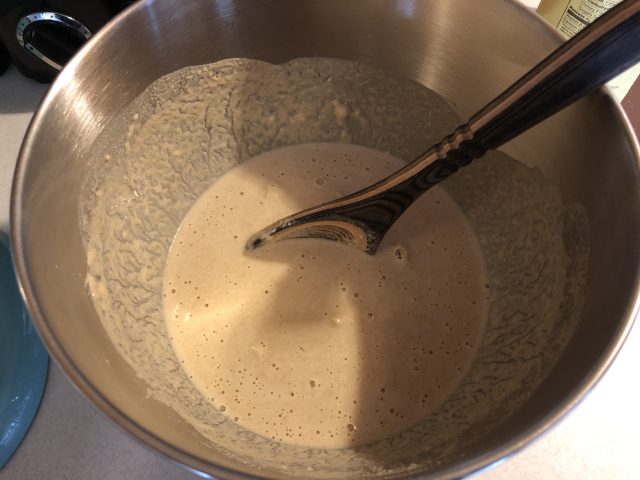 You can see the bubbles already starting to happen.

Scrape down the sides of the bowl and let this sit for 15 to 20 minutes, until it has risen and is more bubbly/foamy. This is called the “sponge”. I love this process. It’s the most fun science experiment ever. 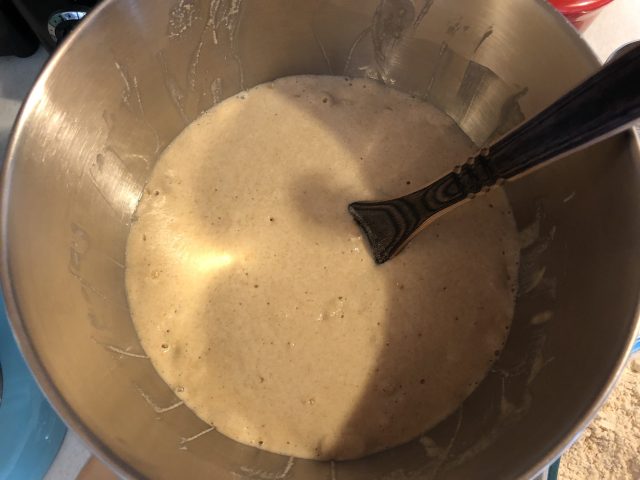 After twenty minutes, it has bulked up and is foamy. 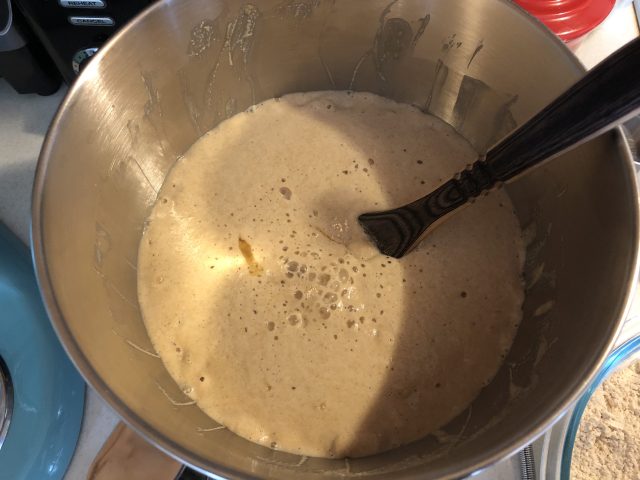 It really bubbles up when you add stuff!

Mix together 4 cups (1 pound plus 2 ounces) whole wheat flour and 2 1/2 teaspoons salt, and dump it all in, all at once. By the way, when you measure your flour, stir it up first with a spoon so that it isn’t packed down, then spoon it into your measuring cup to measure, leveling it with a knife. If you just jam your measuring cup into your flour to scoop it up, it will be packed, and you will end up using too much flour, leading to a dense bread. 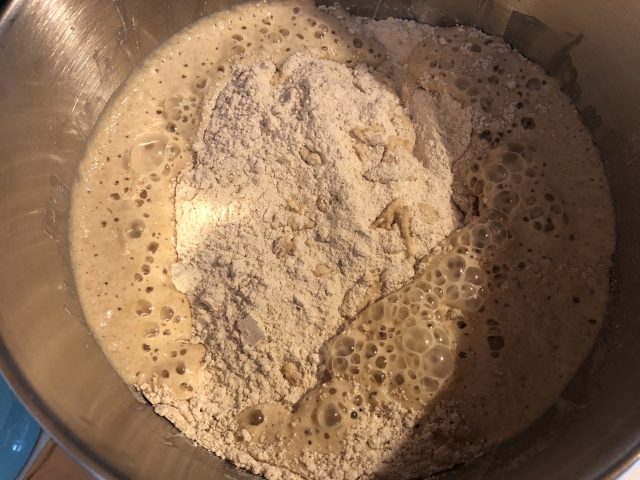 The bubbles go wild when I add the flour. It almost looks like it’s boiling!

With the paddle attachment of your stand mixer, mix everything together on low. This shouldn’t take long at all. You just want everything mixed. 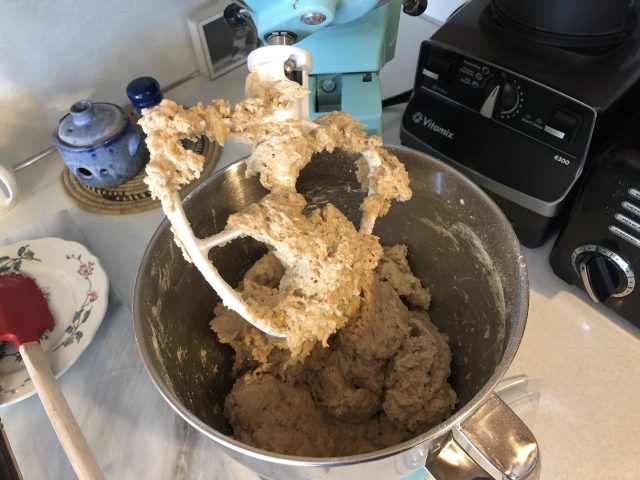 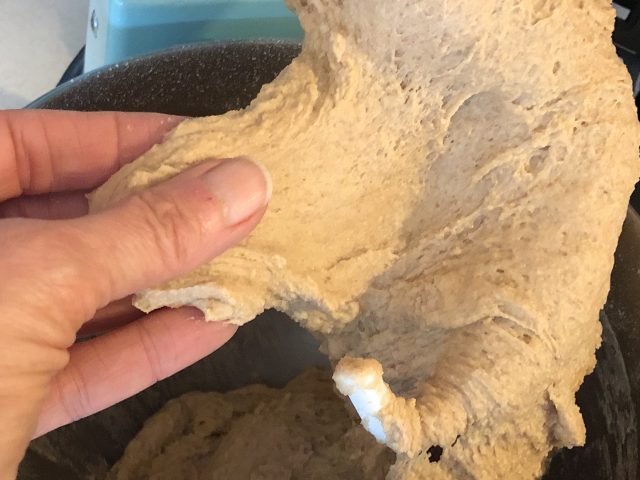 The dough feels really lovely! A little warm and stretchy; tacky but not sticky.

Flour your counter or board lightly. Put your hunk of dough on it. 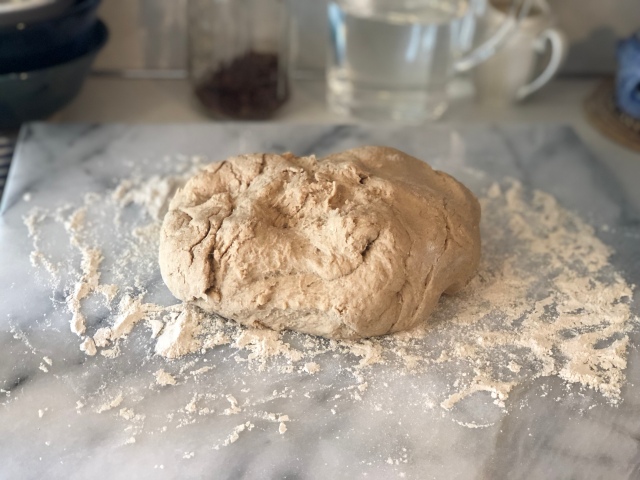 Stretch it out to make a large rectangle-y square-y shape. Mine ended up 18″ by 16″. You want your dough to be about a half inch thick at the most. Make sure as you do this that your dough is not sticking by checking occasionally. Do this quickly! 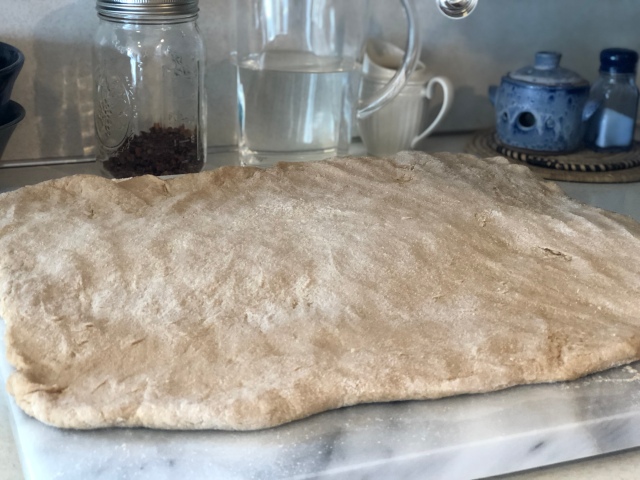 Your dough should be easy to handle. Flour your hands a little to make it easier.

Now take a cube of unsalted butter (1 stick, or half cup) that is partially warmed up but not completely melted, whip it up in a bowl with a fork. You want the butter to be spreadable, but not melted. You actually might want to do this part while the dough is mixing so that your butter is ready to go. 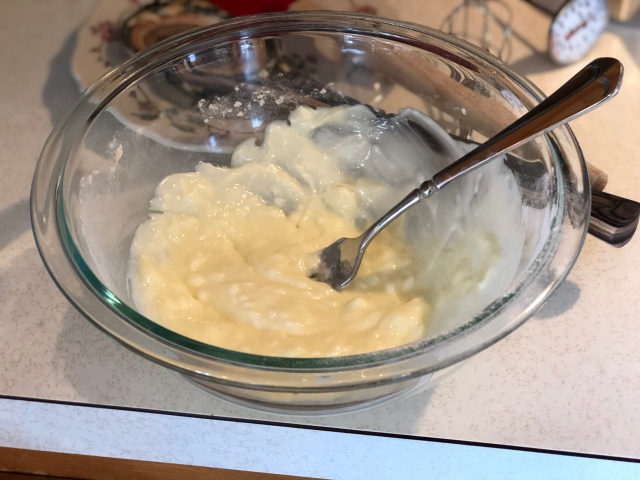 Smear it all over your dough. Then sprinkle 2 1/2 Tablespoons of cinnamon over it.

This is halfway through the cinnamon sprinkling part. 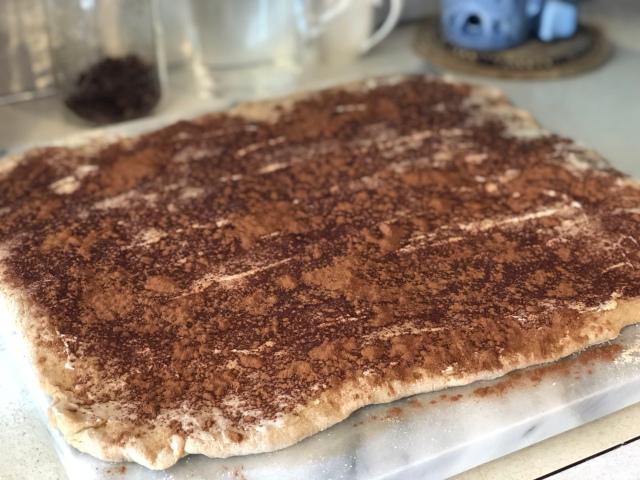 When you have covered the butter with all of the cinnamon, then add a cup (packed) of brown sugar, sprinkling it evenly over the butter and cinnamon, and then smoothing it out a bit. 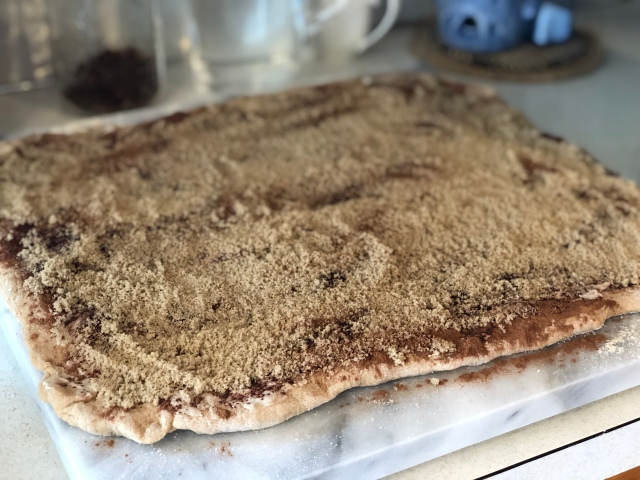 A nice even layer.

Roll it up. Don’t worry if the ends don’t look pretty or if stuff oozes out of the ends. 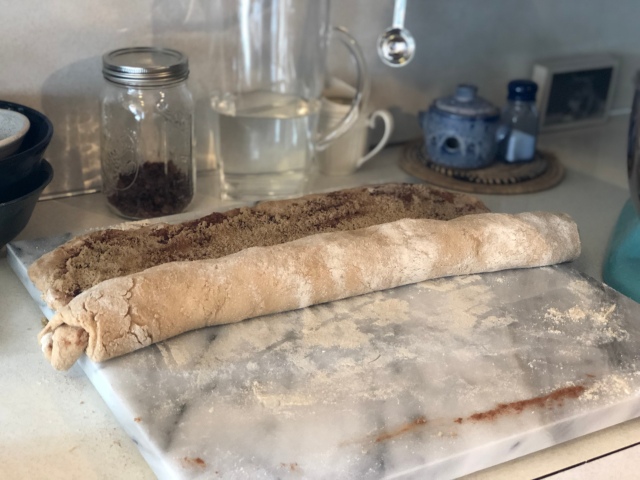 Mine was snaking over the edges of my pastry board! 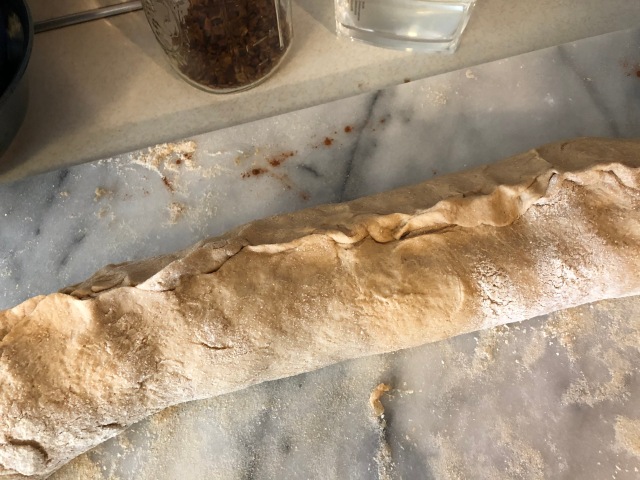 With a sharp knife, make a mark in the middle, then each half in half, etc, until you have 16 pieces, not including the messy ends. Pieces should be about an inch thick. Now cut all the way through with a nice sharp knife. Cut the messy ends as well. This should give you twenty cinnamon rolls (16 good ones, 4 runts). 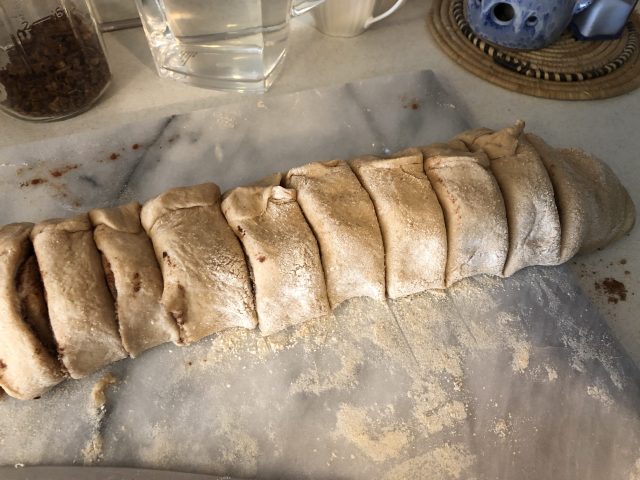 My slices were a bit uneven, but it doesn’t matter.

Put the slices in a buttered baking dish. I used my lasagna dish, because this recipe makes a lot of cinnamon rolls. However you slice your rolls, thicker or thinner, choose a baking dish that will hold the rolls rather snugly together – they should be touching. 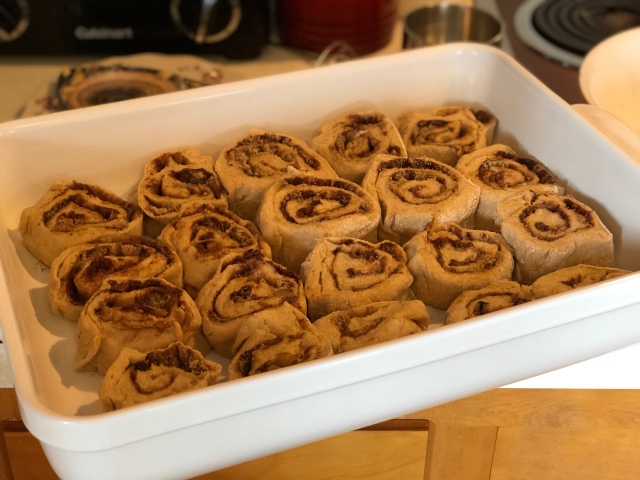 It looks sloppy, and that’s okay.

Cover with a tea towel and let rise for about 45 minutes in a draft-free area of your kitchen. Before the 45 minutes are up, at the 30 minute mark, preheat your oven to 375°.

When you remove the tea towel, your cinnamon rolls should have risen and smooshed together in the pan. 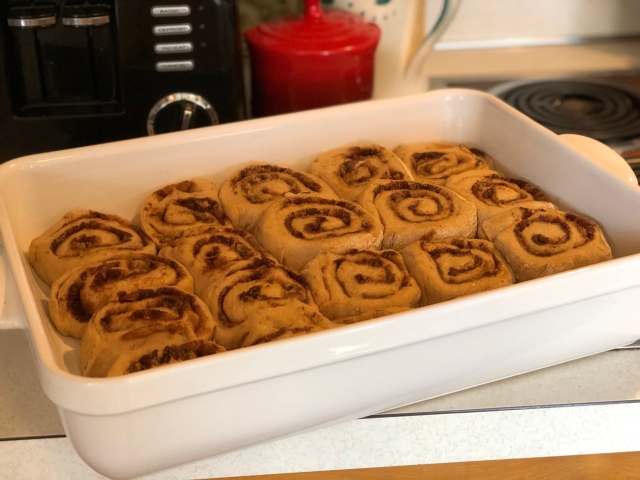 Put them in the oven and bake for 20 to 25 minutes. The tops should be golden brown. I like to rotate the pan halfway through for even baking, and also so I can get a closer look at things. When they look ready, take them out and let them cool almost completely before frosting. Or at least that’s what I did. Because I was busy. 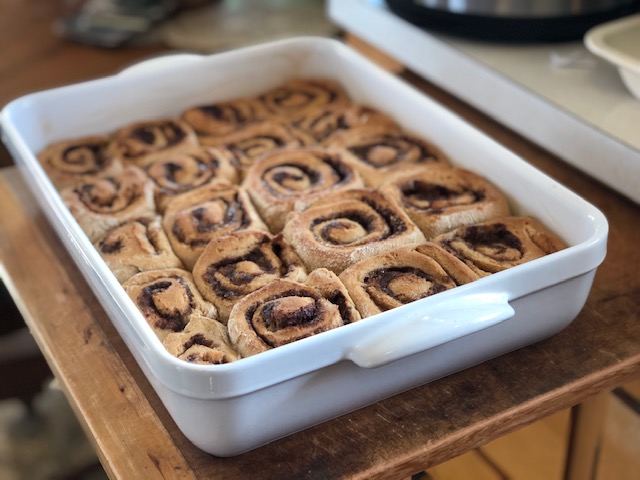 You may be tempted to try them without frosting. We did, and I advise you to frost them. They were a bit too rustic sans frosting. Icing is 2 cups of powdered sugar, 3 to 4 Tablespoons milk, a couple pinches of salt, and a half teaspoon vanilla extract. Make it so that you can drizzle it. You want it to be thick enough that it stays mostly on top of the cinnamon rolls, but still able to drizzle and have some ooze into the crevasses.

The missing ones are the ones we ate without frosting. They are better with frosting!

I think these cinnamon rolls are pretty good. They are 100% whole wheat, so I am going to pretend that makes them healthy. They are definitely better than the strange cinnamon bread experiment I did a couple of days ago. These are just my first attempt (at whole wheat cinnamon rolls), and I am pretty happy with the results, but because of my inexplicable desire to experiment, I know it is not my last. 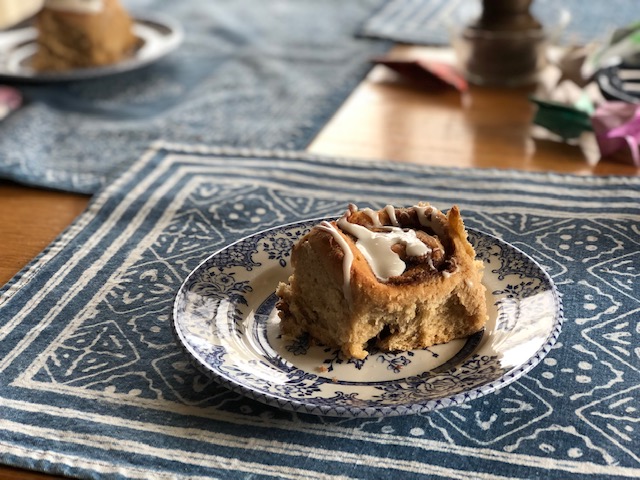 This entry was posted in Comfort Food, Fun in the kitchen!, Yeasty Things. Bookmark the permalink.