A bit of old-world comfort.

The other day I went to visit my friend Carol. Somehow we got on the subject of bread. Maybe it was because I told her she had to come to my house and teach me how to make some of the wonderful breads she makes… yeah, that was it. Anyway, she mentioned a couple of different kinds, including a Swedish Rye bread she makes, called Limpa bread. I had not tried that one, but it sounded amazing, and I really wanted to know how she made it. She said it was a recipe that her grandmother made, but it was a bit dry, so Carol had played around with it and come up with her own version. By the way, Carol’s grandchildren call her “Swede”. I just love that.

Mickey (her husband) said this bread was absolutely delicious with split pea soup, so you know I was convinced. You’re going to think that split pea soup is the only kind of soup I ever eat! Anyway, we set a date, and Carol came over. I told her I had most of the ordinary ingredients…. yeast, flour, etc. But she brought some other things: rye flour, an orange, and some fennel and anise seeds. 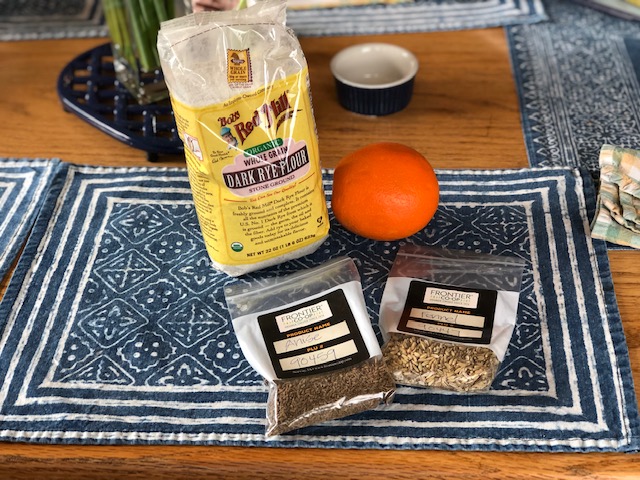 She had me at fennel and anise; I practically buried my face in the little packets and breathed in deeply. I have left these packets out on the counter since our bread baking day, just so the aroma keeps filling my kitchen.

So here is what we did. In the bowl of a stand mixer, mix together:

Mix with the paddle attachment of stand mixer, or a large wooden spoon by hand. Mix well, and let sit for 15 to 20 minutes. I have since learned that this is called the “sponge”.

Now switch to the dough hook attachment if you are using your stand mixer (or if you are doing this by hand, roll up your sleeves and get ready to sweat).

Turn the stand mixer on low and add in, little by little, the 3 additional cups of flour. This is where things got a little fluid, and by that, I mean that I’m not really sure exactly how much flour went in when making this with Carol. I kept adding while the mixer was going, and Carol kept saying “add a little more”. At one point, when I turned away to turn the kettle on for tea, I noticed out of the corner of my eye that Carol had taken the bag of flour and was just pouring more and more into that bowl. The kitchen was a floury mess. But I will tell you this – everything Carol does in the kitchen is magic. We kept going, and the dough ended up being a bit tacky, but not too sticky. It was a little bit elastic. The whole stand-mixer-dough-hook-mixing probably lasted around 7 to 8 minutes.

At this point, you will dump the dough out onto a well floured counter or pastry board. And I mean really well floured, like a seriously thick layer of flour. Knead the dough by hand… a lot. What happened to me and Carol was that we forgot to add the grated orange rind to the “sponge”, so I kneaded it in, so the kneading took a while to get the rind incorporated evenly. Carol says all that kneading made the bread extra wonderful, but she is just sweet like that. Knead the dough until it is kind of springy. This might take 5 minutes or so. Cover with a tea towel (right there on the counter or board, no need to transfer it to a bowl) and let rise for about an hour. It should double in size.

Once the dough has doubled in size, punch it down – you might hear air escaping like a sweet little sigh – and cut the dough in half. Shape each half into a rectangle, then fold one of the short ends in, then the other, like an envelope, then do that again. You can refer to my no-knead bread post to see what this looks like. You will have a kind of a ball. Shape it so that it is roundish, and flip it so that the ball is seam side down, placing it on a greased or parchment-lined pan. Repeat this with the other half of the dough. Both should fit on a large cookie sheet.

At this point, turn the oven on to preheat to 350°, then cover the dough with tea towel and let rise another 30 minutes while the oven is preheating.

I chose to make some cuts (about 1/2 inch deep) on the top of one of the loaves to make it look extra pretty, but it’s not necessary. Put the pan with the loaves into the preheated oven, and bake for 35 to 40 minutes. The bread should sound hollow when you tap it on the bottom. Place the loaves on a cooling rack and let cool almost completely before slicing. 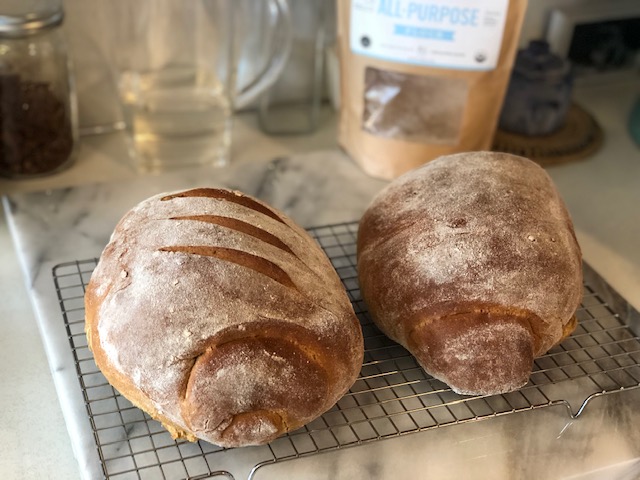 One with pretty cuts, one without. Both are fabulous.

And yes, I did make split pea soup for lunch that day, so that Carol and I could have our fabulous Limpa Bread with it, just like Mickey suggested. The bread is so comforting and delicious; fragrant and earthy, with a slight sweetness. It will fill your house with such heavenly smells that you will want to make it every day. 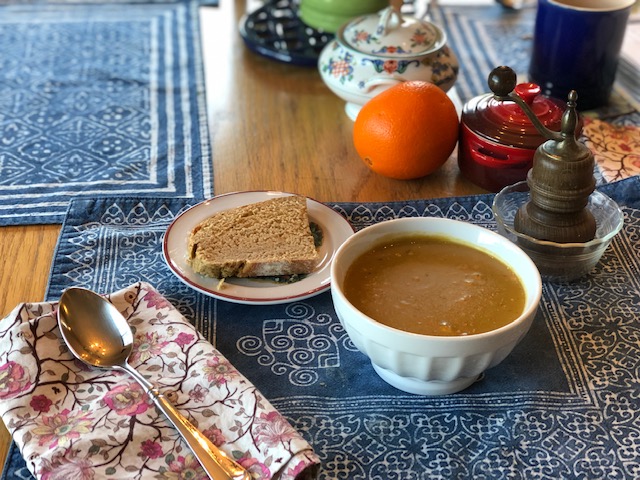 You can have this bread with soup, or just eat slice after slice with butter. So good. 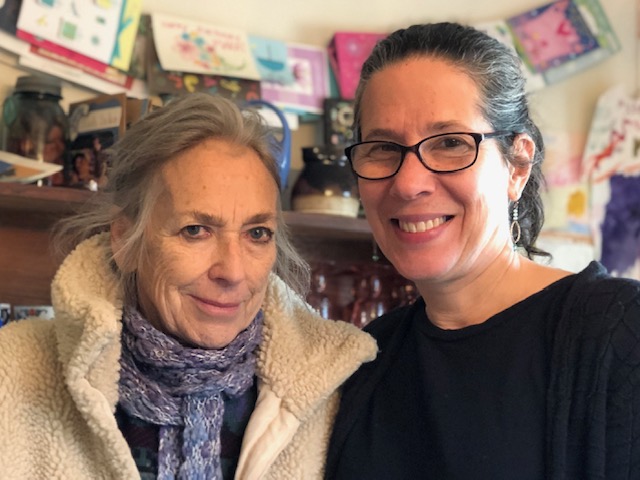 Carol (Swede) on the left. She is one of my favorite people.

Mix ingredients in order, but only using 2 cups of the white flour. Let sit for 15 to 20 minutes. Then slowly add the remaining 3 cups flour, using dough hook of stand mixer. Let it mix for about 8 minutes. Dump dough onto floured surface and knead by hand for a bit more. Cover and let rise for one hour. Punch down, cut in half, and shape into loaves on parchment-lined or greased pan. Cover and let rise about 30 minutes. Bake in a preheated 350° oven for 35 to 40 minutes. Let cool almost completely before slicing.

**By the way, for the all-purpose flour, I used Cairnspring Mills flour, which is a local, small production mill right here in our Skagit Valley, and they use the grains that come from our local farmers to make their flour. It doesn’t get much better than that. Read more about them here: Cairnspring Mills.

This entry was posted in Comfort Food, Fun in the kitchen!, Yeasty Things. Bookmark the permalink.