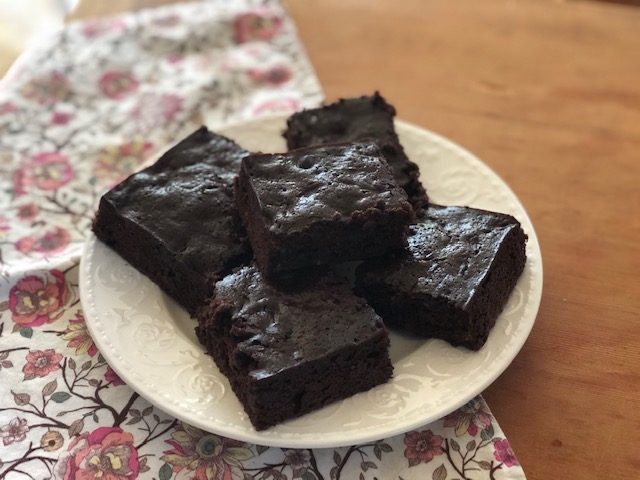 It is August in Seattle, and there is a fall feeling in the air. It’s the time I need to be really creative to figure out ways to use all of the zucchini from just one plant. 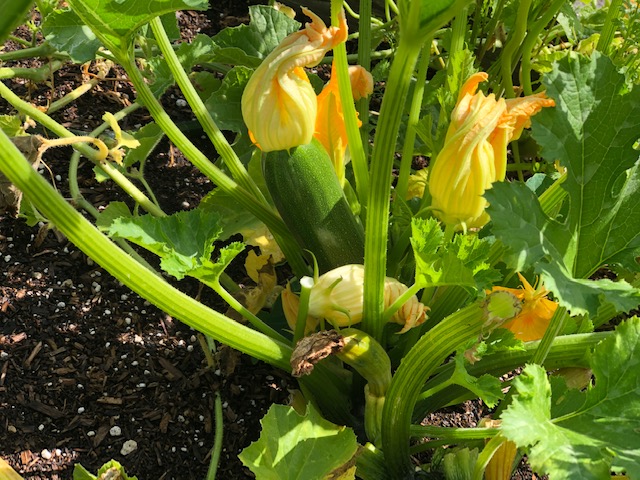 My daughter Mara has been wanting to make brownies, and I noticed a zucchini brownie recipe from King Arthur Baking Company that looked interesting. The perfect opportunity for some mother/daughter time. Here is Mara in the kitchen. 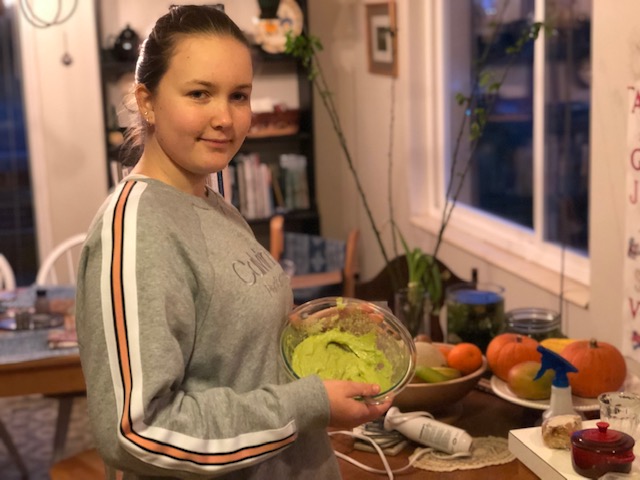 Gaucamole is one of her specialties.

So yesterday, when I had a few other things going on, and needed to get dinner on the table, and needed to be at a school meeting, I called out to Mara to see if she wanted to make brownies with me. She appeared in an instant. Let me tell you something about Mara: she is fast. She is like a whirlwind in the kitchen. I told her to look at the recipe, which I had pulled up on my phone, and tell me what to do. She put me on zucchini duty, while she started pulling out all other necessary items.

She told me I needed to cut the zucchini into chunks, and tamp them down. What? I had not read the entire recipe, but I made assumptions about it. Well, okay, so I got on it. We both furrowed our brows at the idea of tamped down chunks of zucchini in brownies, but anyway… then I asked her to read the actual steps of the recipe, and it turns out the recipe calls for a food processor, which we don’t have! So I switched gears and set aside the chunks of zucchini; those ended up in our dinner. I got out more zucchini (not a problem) and started grating.

We just started putting all the ingredients into a large bowl and mixing with a wooden spoon. It then occurred to me that King Arthur recipes usually have “Bakers Tips” near the end of their recipes, so I scrolled down, and sure enough, they suggest that if you don’t have a food processor, you can use a blender. I imagined the mess of the blender, and Mara agreed that we should just stay the course and mix everything in a big bowl. So we did. Right at the end, we added chocolate chips. I at first grabbed “mini” chips, but then decided against it, and just used regular chips. We dumped them in and stirred. I then looked at the recipe and noticed that it said to add the chocolate chips and pulse a few times to break the chips into small bits. Oops. Keep in mind that all of this is happening at an alarmingly fast pace.

The recipe called for a 9″ x 9″ pan, which we don’t have! So we went with an 8″ x 8″. We both agreed that the brownies would be thicker, so not a problem, right? We baked them for 20 minutes and checked at that point. The batter was still too wet, so we set the timer for 5 more minutes while we hustled and bustled around the kitchen cleaning up and getting dinner ready. Suddenly I looked at Mara and asked her if the timer had gone off. She didn’t know. Well, it had, and neither of us heard it! So I’m not sure how much longer the brownies went, but they were slightly puffed up (the kiss of death for brownies). I pulled them out of the oven to cool, threw dinner onto a platter, and sent my family onto the deck to eat while I sat in front of my computer for a Zoom school meeting.

Why am I telling you all of this??? Because it seemed that we royally screwed up with these brownies. But when the meeting was over, and dinner was done, and the brownies had cooled, we all sat down together for some dessert. The brownies were dark, fudge-y, gooey perfection. And I got to have some fun in the kitchen with Mara. Oh yeah, the recipe called for frosting. Nope. We opted for vanilla ice cream. I wouldn’t change a thing.

*If your zucchini is watery, place grated zucchini between sheets of paper towels or tea towels to absorb some of the moisture before using.

**Hats off to King Arthur Baking Company to come up with a recipe that even when you screw up royally, the results are royally delicious.