I know I already wrote about an all-butter pie crust, and that one is pretty good, although a bit fussy. But since that time, I have found the perfect pie crust. I mean, it is perfect. When I say perfect (shall I say that word again?), in my world of pie crusts, that means that the crust is easy to make, doesn’t require fancy ingredients, uses only butter, is fork-shatteringly flaky, and is consistently amazing every time I make it. 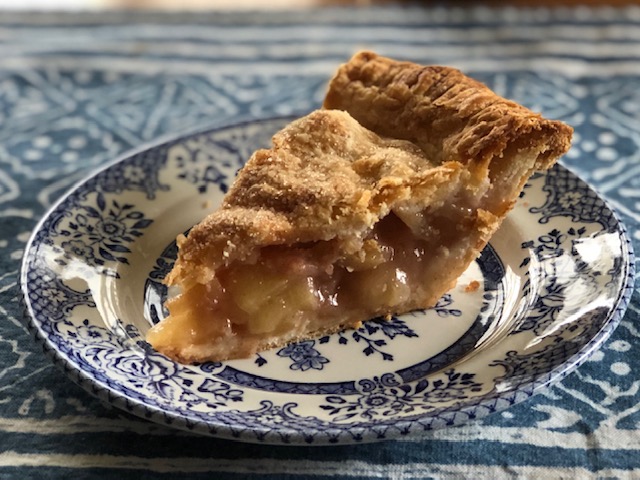 Even though I was pretty happy with my other pie crust recipe, this new one knocks it out of the ballpark every time. Every time. This recipe comes from Kenji López-Alt; it is his Easy Pie Dough Recipe. The name sounds so modest, you’d never know how fantastic it really is. And I’ve tried a gazillion different pie crust recipes, including all the fads, and none compare to this one. I can’t even believe I’m letting you in on this secret. But trust me, this is the one. 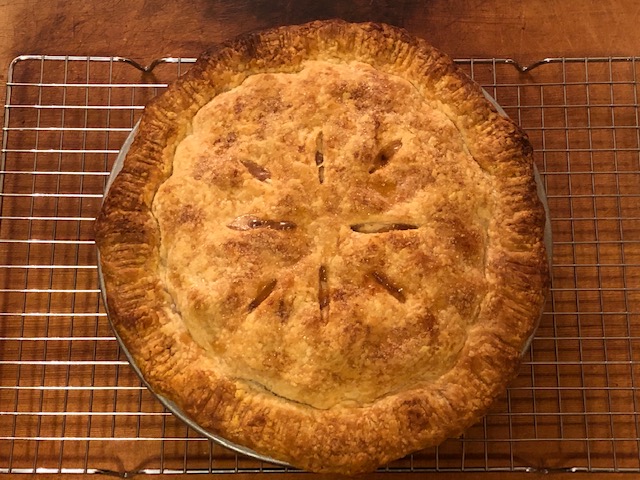 Once I discovered this crust, I couldn’t stop making pies. All kinds of pies. 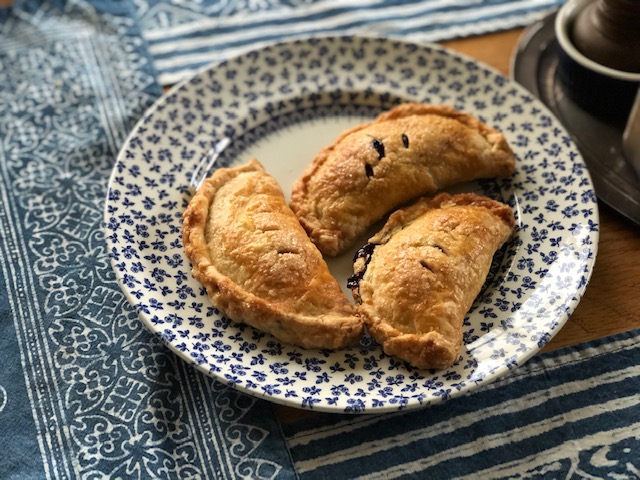 The moment I love is when someone bites into one of my pies, and they get this look of disbelief on their face, and say, “Did you make this??”. Yeah, that’s the moment. Even better is when my husband Matthew says it, because he eats everything I make, so taking him by surprise is a sweet moment indeed.

Okay, now that you are thoroughly convinced, let’s get to the recipe. When I first came across this recipe, I ignored it, because it called for a food processor [sigh]. I don’t have one, and they are a pain to clean, so I don’t want one. If you can convince me otherwise, that’s great. My birthday is two days after Christmas. Yeah, not the best day for a birthday, but let me not get sidetracked. I read all the reviews, which were all great, so I was bummed about the food processor thing. So I decided to experiment and use my stand mixer. It seemed like a stand mixer would not work… just could not do the same things that a food processor with a sharp blade could do. But understanding what the technique actually does – create a butter/flour paste, then break up the chunks of paste and coat them with flour to create flakiness, that seemed like it could maybe work. And it does. I have been making this crust ever since and have not looked back.

**Note – I am exact about flour measurements, because these are what work best for me. When I went back to Kenji’s recipe and made it using his weight measurements, I found the dough had too much flour. If you don’t have a kitchen scale, stir your flour well before measuring to aerate it, sprinkle the flour into your measuring cup using a spoon, and level it with a knife. Too much flour will kill this pie crust.

I’m including pictures below. I think having pictures to see what the process actually looks like is important, since it’s an unusual technique!

Combine 2/3 of the flour, sugar, and salt in the bowl of your stand mixer. Cut butter into 1/4″ pats and place into the bowl with the flour mixture.

Yes, there is flour under there.

Toss the butter and flour together, then mix on low to medium speed in short little bursts just until the mixture starts to look like a crumbly paste.

Spread the crumbly paste evenly in the bowl with a rubber spatula. Sprinkle dough with remaining 1/3 of the flour.

Mix at medium speed in a few little short bursts, just until you have lots of little crumbles coated in flour. Do not over mix! 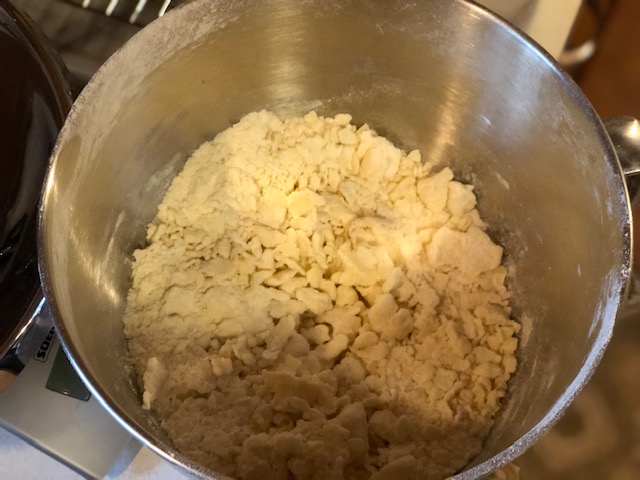 Add the ice water one tablespoon at a time, tossing with a fork as you go, until dough starts to come together. Press down on dough with a rubber spatula to bring it together. 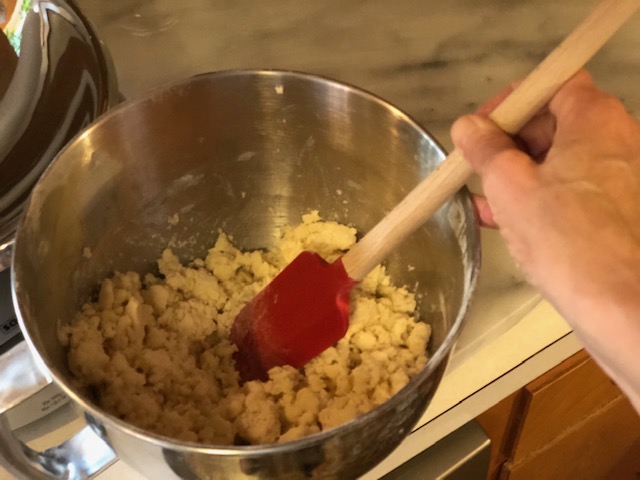 Do this until until it comes into a rough ball.

This shouldn’t take long. Just press it all together.

Dump out onto work space. 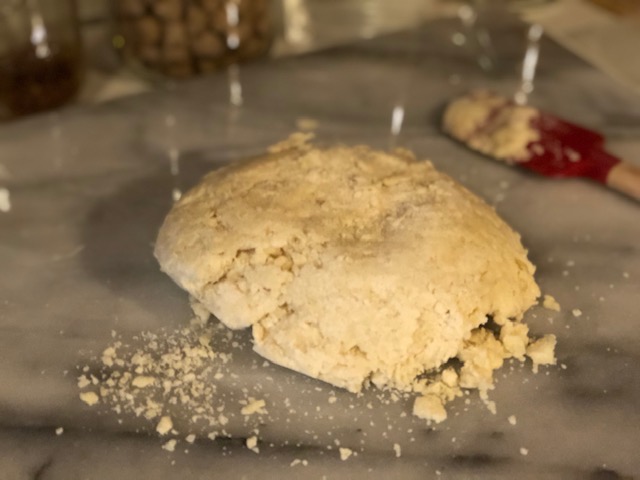 See how it is still crumbly? That’s ok!

Divide dough in half.

I love my bench scraper.

Place each half in plastic wrap, then quickly bring dough together using the plastic wrap, and not touching the dough with your hands.

Make a 4 inch (or wider) disc and wrap well. 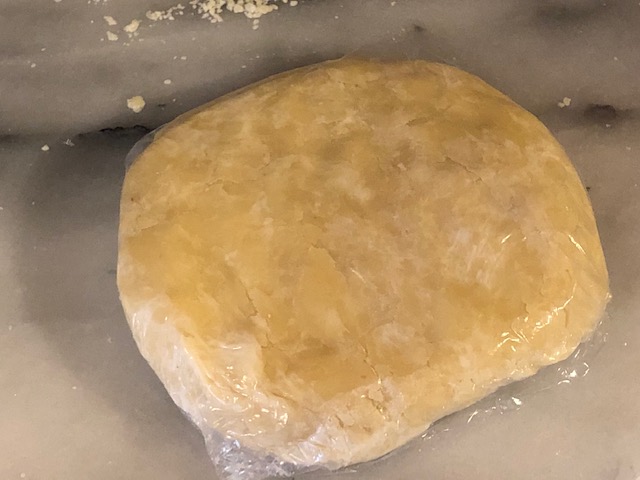 Look at that marbleized butter!

One last thing I want to say: It is important to add the flour in two stages!!!! On a couple of occasions, I have forgotten to divide the flour in the beginning (GASP), which means that I went ahead and added the salt and sugar to all of the flour, only to realize afterwards my mistake. Not a big deal, since I hadn’t added the butter yet. At this point you can still divide the flour into 2/3 and 1/3. I’m not suggesting you do that, but just letting you know that it’s not the end of the world. What is important is adding the flour in two stages. That part is an absolute must. Now get ready to amaze your friends and family, and yourself!